“Rejoice in the Lord always. Again I will say, rejoice!”
— Philippians 4:4

“Many Christians have made the dramatic discovery of the ancient truth that we are called to praise God in all circumstances, and that miracles are often the result, the biggest of all usually being the melting of our heart.”
— Judson Cornwall

The apostle Paul wasn’t trying to sound religious when he encouraged us to rejoice in the Lord always. I think he had a pretty good idea of what “always” meant. He’d been shipwrecked, beaten several times, left for dead, abandoned by friends, and imprisoned. Not to mention, he had that annoying little thorn in the flesh that just wouldn’t go away no matter how much he prayed. Paul knew pain. He knew adversity. Yet, he also knew a real God, a God who never promised to keep us from suffering but promised to be with us in our suffering.

Paul understood that praise freed spirit and released his faith. I’m sure you remember the time he and his companion Silas were cast into prison. Try to picture that day. The marketplace was bustling with activity as the Middle Eastern sun of Macedonia bore down on them, amplifying the mingled smell of body odor, animals, leather, and produce. The crowd parted and formed a huge circle around Paul and Silas as they were dragged naked through the street and then flogged.

The iron pellets tied to the ends of the leather whips actually shattered bones as they landed across their backs. With each crack of the whip, the crowd cheered. Some spat upon their blood-covered bodies. Finally, when Paul and Silas lay face down in the dirt, the jailers dragged them away.    When Paul and Silas were carried away to prison, they didn’t know what the future held. They had zero reason to believe that they would ever see the light of day again. Yet what do we see? Let’s read, “Again and again the rods slashed down across their bared backs; and afterwards they were thrown into prison. The jailer was threatened with death if they escaped, so he took no chances, but put them into the inner dungeon and clamped their feet into the stocks. Around midnight, as Paul and Silas were praying and singing hymns to the Lord—and the other prisoners were listening— suddenly there was a great earthquake; the prison was shaken to its foundations, all the doors flew open—and the chains of every prisoner fell off!” (Acts 16:23-26 LB). 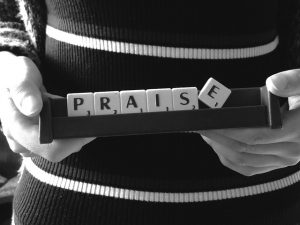 Authentic praise is when we extol the character and faithfulness of God even when we don’t understand the circumstances around us. It’s affirming that He’s in control. God Earthquake praise happens when we choose to praise God smack-dab in the middle of the darkest, filthiest dungeons of life, when we are chained down, with seemingly no way out. Praise is a key that can fling open the door to victory in our lives.

This devotional is shared from Ignite Your Faith by Tim Clinton and Max Davis, available at https://www.aacc.net/product/ignite-your-faith/.